The AudioProtocolTransmitter module, can encode digital protocols as audio signals from the sound card/audio output from a PC. To be able to transmit the signals, some kind of hardware is needed. This is a description of how to build a generic RF-transmitter working on the 433MHz band.

The first step is to transform the low level AC output signal from the sound card to a digital signal strong enough to drive a transmitter. This is done with a simple OP-Amp circuit as follows: 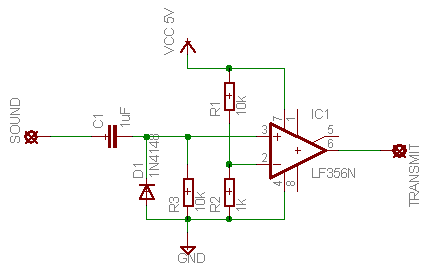 The OP-Amp can be any general purpose type which can handle single power supply and high power output.

This is how the remote control looks (to the right):

Disconnecting the logic chip requires a steady hand, here are the steps:

Locate the signal output pin from the chip. This is where the digital protocol is sent to the RF-transmitter stage. 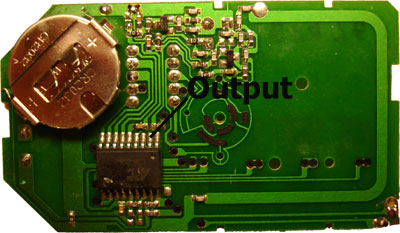 Cut the track on the board from the output pin and the pin next to it, remove the surface mounted capacitor. This is a bit tricky, because the tracks are small… 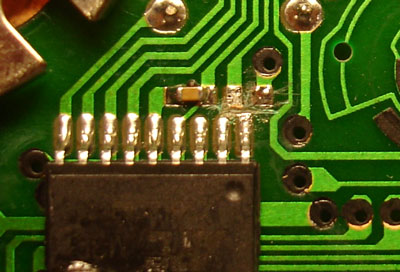 The final step is to connect our digital output signal (from the OP-Amp) to the RF-transmitter. I used the hole in the PCB as guide and soldered it to the connecting pad of capacitor I removed: 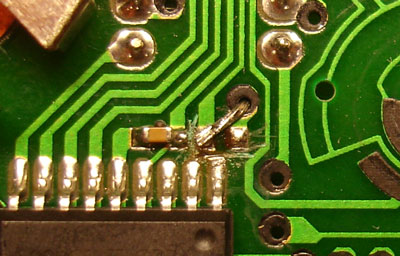 Now any output from the sound card will be transmitted as a 433MHz signal, and we have a generic remote control transmitter!

There are many ways to hook this up to the computer. I used a cheap USB-headset converter as sound card, put the OP-Amp-circuit on a Veroboard and powered it from the USB-cable and finally put the whole pile into the box of an old WLAN-HUB. It looks ugly inside, but once I close the box I have a nice looking USB-connected generic 433MHz transmitter 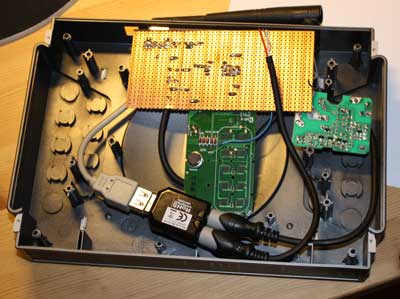 The circuit board to the right of the Veroboard is actually a receiver I tried to put in the same box. I had to give that up, since it is to sensitive to the electromagnetic noise from the USB. I had to use the UPM-recevier connected via a few meter cable to get away from the noise.